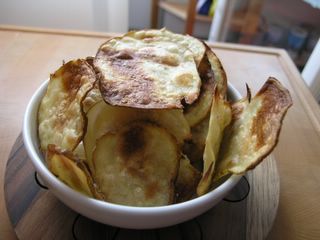 Let me say straight away that this is not like the chips you buy. Obviously. There's a good thing and a bad thing about them. The good thing is that they're a lot healthier than what you buy. You control what goes on them, and you can make sure that that's just a little oil and your favorite seasonings. The bad thing? Yeah, they're not real chips. They're not as crispy, and not as.. umm, processed. Still, they're pretty good and a nice fix if you want something salty and carby. Easy to make - but be careful to watch them in the oven, there's a fine line between "done" and "charred".

The recipe comes from the Gourmet Cookbook - I used the "look inside" feature on Amazon.com

Oven Baked Potato Chips
1 large potato
2 tbsp olive oil (I used less - I used a Misto sprayer, and then brushed it out)
salt
pepper, rosemary, chili - whatever you want

Slice the potato very thinly with a mandolin. Preheat oven to 180 degrees C. Put potato on parchment paper, one layer. Brush with oil, and add whatever seasoning you want. (I used flavored salts - the chili salt was delicious here). Bake for 10-20 minutes - watch closely.
Posted by Lena at 07:20

Oh, these look tasty. I love trying to bake things that are usually fried.

Oh... these look good, but you need to check out the sage-layered oven-baked potato chips from Barbara Kafka's book Party Food. YUM!!!

Thanks for your honesty. The chips are not crispy at all really. I hate when people say home-baked chips are crispy. They are all liars. I've tried everything from a 500 degree oven to moving the oven rack up. They still come out flexible and unchiplike. Lets face it, you need an extreme imagination to call these chips. But you said so yourself, so thanks.