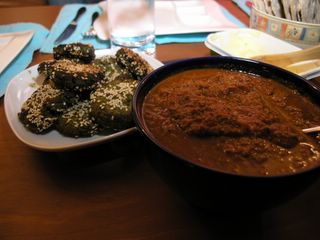 I was excited - as I usually am when Is My Blog Burning rolls around - when Sam announced this month's theme - I Can't Believe I Ate Vegan!

In my case, it's I Can't Believe I'm Cooking Vegan, or something like that. Some entries are already up, and I've noticed many saying that they would have no problems eating and cooking Vegan. Well, I would have major problems. First off, I'm very reluctant to give up meat, so even Vegetarian is not much of an option for me. And to cut out cheese and eggs? Dude. Never.

And one big thing for me is that I will not use substitutes. No fake meat, no fake cheese, no fake dairy, NO. (And for goodness sake, no tofu.) So, for this event, I cooked from just regular vegetables and good old ingredients. Nothing weird. Not that I'd find it even if I wanted to - Sweden has very few substitute things, and I wouldn't know where to find half the stuff I've seen used in some Vegan recipes.

I invited my sister and her fiancé Peter (The Sushi Chef, as I've referred to him before on this blog) for dinner, and cooked a lovely dinner. For the main course, I made homemade oven-baked falafel with roasted root vegetables, almond salsa and a delicious tomato sauce. For dessert, I made pineapple in chili and vanilla syrup with a coconut sorbet. The falafel recipe I used was roughly this one but I rolled the falafel in sesame seeds, and I added a minute of frying after the baking, to get some more color. The roasted roots don't need a recipe - just get a bunch of your favorite root veggies, and maybe some red pepper, toss with olive oil, salt and rosemary, and roast for about 40 minutes in a 200 degree oven. 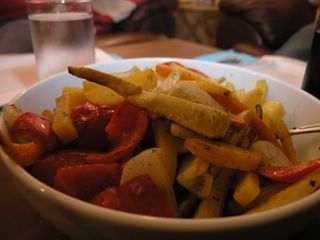 The almond salsa is from the Swedish chef Malin Söderström. The Pineapple recipe is by Tina Nordström, a Swedish chef who has a cooking show on TV, and the sorbet comes from Santos at The Scent of Green Bananas. I had to fiddle with the pineapple recipe, so I won't give that today. It turned out fine, but it was a lot more work than it should have been, so I'll give it another go before posting.

Almond Salsa
(picture on top - yes, it does look disturbingly like sauce bolognese, yes, I know.)

Put everything in a food processor, and run until smooth.

Start by sweating the onion in the olive oil for five minutes. Add the sugar and salt. Add the brandy, and let it boil until all the liquid has vaporated. Add the tomatoes, and a little bit of crushed chili, and let simmer for as long as possible. I left mine for three hours, which was perfect. 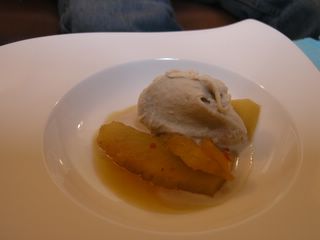 Combine sugar and water in a small saucepan and bring to a boil. Let it reduce by about half. Remove from heat, stir in the coconut milk until fully incorporated, and place in the fridge until really cold. Then, pour it in an ice-cream maker and let it run for a fairly short time - 10-15 minutes did it for me.

The star of the show? The sorbet. Oh my god. It is so good. Absolutely great. I'll make this many more times, for sure. And the best part - it doesn't go icy in the freezer, but stays beautifully creamy. Yum!

Everything sounds delicious, Anne! And don't worry, I know a lot of people (my father, who is Swedish, actually) who could never give up meat. He keeps bacon bits in the fridge in case of emergencies. And by emergencies, I mean salads.

Great spread, Anne! I agree on substitutes- nothing creeps me out more than "meat substitutes." Though Im guilty of liking tofu and other soy products, its really more a health thing than giving up on these I hold dear, like cheese!

hi anne! the almond salsa sounds intriguing, i'll have to give it a go. i'm glad you liked the coconut sorbet!

I'm absolutely with you. I was a vegetarian for years, but I never gave up cheese or milk. No way. (There was a four-month period this year, just after my celiac diagnosis, when I couldn't eat dairy, and I was bereft.) And I really can't stand meat substitutes. Why can't we just eat vegetables?

Great job on this. I've been enjoying your blog for ages without saying anything. So, hello.

What an absolutely marvellous spread anne. It all sounds delicious. I made falafel too, but I only fried mine.

I mainly agree with the no fake. I had some vegan margarine for the challenge and it was just grotesque looking. It wouldn't melt either. Having said that, i used to eat 'mock duck' at a malaysian restaurant in London, slathered in peanut sauce. It was really greasy and absolutely delicious. I could revisit that memory for real quite happily if I had the chance.

I am going through a bit of a coconut phase myself recently, I blame fiji. I hope to feature them a bit on my blog over the next few weeks.

thanks for taking part in IMBB19

Great meal Anne. I still haven't made a straight up coconut sorbet in all my icey adventures!

That seems to be the dessert of choice in the Thai restaurants around here. My favorite treatments:
- coconut sorbet topped with dark chocolate
- coconut sorbet sprinkled with candied rose petals

Thansk for the inspiration!

Why the hate of tofu? Just to let you know, there are no "weird addatives" in the tofu you make at home (it's really not that hard to do - if you've ever made cheese yourself you know the deal) and it's definately no more processed than the cheese you eat - except tofu didn't have to go through a cow to reach your table. Tofu is soybeans, water and vinegar (or lemonjuice). And the best thing about it is that it has the proteins you need, easily accessible for you body, which is not the case for soy beans. This is why it's an important part in alot of asian cooking. And for me, tofu is not a meat substitute - it is a thing that can be used for most dishes, from starter to dessert. It's perfect in the sence that it easily binds any taste you like. So why the hate?

Well Marcia, I wouldn't exactly call it a "hate".. except I've certainly haven't come across a tofu I've liked, so far. Tofu in itself is probably great. But the things people do with it? Scary, sometimes. Tofurkey? Come on. That's what I mean by meat substitutes. I'm well aware that it's used on its own in many cuisines and that's fine - but I strongly prefer not to have it in mine, seeing as I don't seem to appriciate it. :)