Taste or Beauty - How do you like your apricots? 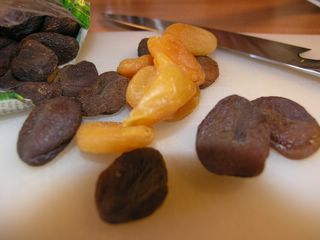 Take a good look at this picture. It has two kinds of dried apricots in it. Until a few days ago, I had no ideas that dried apricots came in another way than the bright, jewel-like, glassy ones. Did you? Note the dark ones in the picture. They’re not like that. What makes them different? They are not treated with sulfur dioxide.

I was actually a bit surprised to hear this. I had never given it much thought – I thought dried apricots really were that bright. Maybe I’m stupid. Apparently a lot of people are highly allergic to sulfur dioxide. Huh. Here’s a link to read more about it.

Anyway – I found unsulfured apricots at my store, and brought home a bag to try. I also had some bright apricots left in my fridge, where they’ve been sitting for a while. So, for my taste-test, I had old, sulfured apricots, and new unsulfured ones. I would really love to be able to say that the unsulfured ones, despite their brown appeareance, were so much better-tasting. Sadly, that wasn’t the case. They were sweet, and much more caramelly – they tasted kind of like figs, or even raisins. (And I'm sadly not much of a fan of either.) Not much like the apricots I’m used to though. The orange apricots were much tarter, and much “brighter” if that makes sense. They tasted like apricots should taste. So, in the case of apricots, I say beauty AND taste wins. Try for yourself!

Oh – what I did I make with all these apricots you ask? I made Clotilde’s Breakfast Clafoutis, a “cake” from oatmeal, milk, sugar, eggs, dried fruit, apples and nuts. I’ve made it a couple of times now, and it’s nice to keep in the freezer for emergency breakfast days.
Posted by Anne at 09:18

I've never seen apricots like that; that's really cool! But I think I'm with you on the taste - I wouldn't want my dried apricots to have a 'heavy' taste like figs.
The breakfast clafouti sounds like a great idea. I have a similar problem as you with breakfast, I never know what to have bc I don't really like cereal and I don't like sweet foods first thing in the morning (have you noticed all packaged breakfast foods are sweet? Pastries, cereals, breads... I don't need a sugar hit first thing!) I usually end up having toast with Vegemite, but that gets a bit boring (no, I'm NEVER organised enough to make a hot cooked breakfast either!)