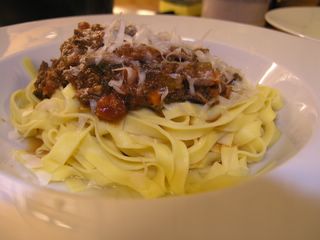 Yet another recipe by Jamie Oliver. I know. Despite this concentration on Jamie recipes, I don’t really cook that much by him. Really. I don’t. But some of the recipes are especially good – that seems to be particularly true of the ones that have "amazing" in their name. He’s not overexaggerating – they are. This one is on his website, so I don’t feel bad posting my version of it that I did the other night. I modified some things – but I have made the original recipe too, and that’s good as well.

800 g meat – I use a cut named “högrev”, but I have no clue what the equvivalent would be. Use something that’s reasonably priced and good for stewing.
Handful of fresh parsley
250 g cherry tomatoes
1 onion, finely chopped
1 stick of celery, finely chopped
4 cloves of garlic, finely chopped
2 carrots, finely chopped
375 ml red wine
500 g can (400 g is fine if that’s what you have) crushed tomatoes
2 tbsp barley
water
salt, pepper, sugar

Start by preheating your oven to 225 degrees. (450F) When it’s hot, put in the tomatoes in any oven-proof dish – you want them to roast a bit. Cut the meat into a few big hunks. Brown in a little bit of oil in a large, deep pan. Add onion, garlic, carrot, celery and parsley, and fry for a couple of minutes. Add the wine, and cook on fairly high heat until all the wine is absorbed. Remove the cherry tomatoes from the oven – they should have cracked a little bit, and leaked some fluids. Add them to the pan, and add the crushed tomatoes too. Add the barley, and enough water to just cover everything. Put a lid on it, and let it all simmer for as long as you can stand. Two hours are good. Hour and a half will usually work, depending on what kind of meat you use.

When you think it’s done, remove the meat, and shred into small pieces using two forks. Add back into the pan, and season with salt, pepper and a pinch or two of sugar. Serve with pasta and some parmesan on top. Yum!
Posted by Anne at 11:33

This recipe sounds great! I'll try it soon. I love it when you have minimum work then just leave the whole thing cooking almost un-attended. I notice you paired it with tagliatelle. That's what I'll probably do too. Tomato, meat and pasta... Yum !

Tried this recipe last night and it came out YUUUMMMMYYYY! I prepared it just as listed. It exhibits very hearty and complex flavors and I placed it over a bed of noodles for the family.

Thanks for the keeper recipe!

Hi Anne, I have just discovered your blog and I am really enjoying it. I am going to try this recipe tonight... will let u know how it comes out.

Yeah I'm living in Sweden myself, and am having a difficult time figuring out 'cuts of meat' here and what they compare too. I did read in a translated swedish blog that högrev is one of the cheapest most tough cuts of beef XD XD Considering the prices here, I guess that's why I usually buy the högrev!! It comes out great if you let it simmer or cook in oven long enough. I've also noticed how bland most Swedish dishes are, I guess that's why my hubby gained 20 kilos in 6 months or so HAHA I'm from Tennessee, and he had never even tasted a Pot Roast. Can you believe it?

THANKS for this recipe and for your blog. Since you are here in Sweden having some of the same difficulties as me, I will love to follow what you do. I have absolutely NO one to ask about any of this stuff & live in a much smaller city. The biggest problem is understanding what cuts the various meats are. It took me 6 months to figure out a picnic bog is a pork shoulder. HAHA

Oh, feel free to ask about anything regarding Swedish groceries, I'm happy to help! (e-mail me or add me on facebook or something, if you need quick help!) :) And hey - I've never had a proper pot roast either, got a fave Tennessee recipe for me? :)