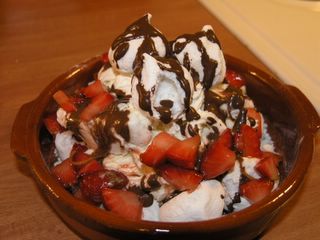 We spent Friday at Per's parents, to celebrate his little brother's birthday. (Well, not so little at 19 years and quite a bit over 6 feet - but still.) It was very nice - we had Hamlet and Glinda with us, for change, and the rest of the cats got to stay at home. We came home on Saturday, and tried to decide on something reasonably fast, but nice, for dinner. A quick browse at the food store yielded a fillet of pork (tenderloin, right?), merengue and whipped cream for the dessert. I sliced the fillet and browned the flattened pieces, and drenched them in a gorgeous sauce that I learned years ago. It goes very well with rice, but I had a yearning for potatoes and made a big rösti instead.

Dessert was something most Swedes love - marängswiss. It's not very translatable - merengue-suisse, possibly. I have no idea if they eat this in Switzerland. It's basically merengue, icecream, whipped cream, and chocolate sauce, and sometimes with added sliced bananas. We found strawberries, so I marinated those in a dark brown sugar, lemon juice from half a lemon and some lemon peel, and that went very well with it too.

Brown the pork in a deep pan. Mix all the other ingredients, and pour over the pork. Cover, and let simmer until pork is done. Serve with rice, or something else that soaks up the saucy goodness.

Grate the potatoes, over a clean kitchen towel. Wring out all excess liquid, and put the dry potato stuff in a big bowl. Chop the onion finely, and add that. Add lots of salt and pepper, and fry in a large frying pan with some butter. Press down on the mixture so it forms a uniform cake, the same size as the pan. Fry until the bottom is starting to get golden, then flip it. (And don't be brave here, it's very fragile. I used a big cuttingboard and carefully slid the rösti onto that, and then flipped.) Fry on the other side until done - 5-6 minutes or so.
Posted by Anne at 09:10

Anne, I just wanted to thank you for posting the recipe for the Rösti. I made it for dinner this evening and served it with some sauteed chicken and mushrooms. It was a big hit, especially with my daughter who ate so much of it I was starting to wonder if she was hiding it somewhere. I've only had Rösti once before at a restaurant and had always meant to look up a recipe but forgot. Thanks to you I have the recipe and I know this will now become one of our family favorites. Cheers!

Woohoo! Deb, I'm so glad it worked for you! It was my first time making Rösti, and I did it all from an idea - but it truly turned out good. My mother used to make something similar, but she added grated carrots and I think, more egg. Hers is a little denser than mine came out. Also very yummy though!

we really do eat meringue in Switzerland! It is one of the national Swiss desserts. The name stems from the little town "Meiringen" which is situated in the Bernese Alps. At the time the dessert was "invented" it was much more fashionable to speak French and therefore the dessert from "Meiringen" got the name "meringue".
We usually do not put chocolate sauce on top of it, but only eat it with vanilla ice cream and a lot of whipped cream, yummi.