Wine - all about wine 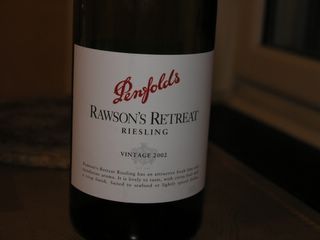 I can't believe I missed Wine Blogging Wednesday. I had prepared so well for it, too. Several weeks ago, I went to Systembolaget, which is the only place in Sweden where you can legally buy alcohol. (Except for restaurants, obviously.) We have a state-monopoly. Whether that is good or bad is debatable - but the service is great.

I found a guy working there, nearly bored to tears stacking boxes of beer, and I told him that I had a challenge for him. His eyes lit up, and you could really tell how excited he was. A challenge? A CHALLENGE??? Bring it on! So, I said that I wanted a riesling, but not from Europe. He sprinted off towards the wine shelves, and started pointing out bottles to me. Words rattled out of him, I couldn't catch half of it, much less remember it now, but he was really very knowledgeable. I finally settled, with his excited approval, on a bottle of Rawson's Retreat, from Penfolds Winery. He gave me about ten menu suggestions, all of which I rapidly forgot.

The perfect moment to enjoy this came up last weekend, when my friend Anna came to visit. We decided to cook a chicken dish from Jamie Oliver's last cookbook - it was a simple thing really, but the recipe didn't work very well. The basics were to put corn in an oven-proofdish, add some squashed up cannellini beans, drizzle with cream and wine, top with chicken breasts stuffed with bananas and bacon strips and cook it in the oven. Well, problem was - chicken wouldn't cook. I finally had to give up, take it out and fry the chicken in a pan, and then put back on the casserole - but it was all worth it. Extremely tasty! I'll do it again, but then I'd probably fry the chicken before starting, so it'd have a bit of color.

The wine went very well with this, and also very well IN it, as it happened. I normally don't like rieslings very much, but coming to think of it, I'd pretty much only tried German ones. And those are generally too sweet. This one wasn't sweet at all - just fresh and fruity. It went especially well on its own, before dinner. That's how I prefer to enjoy my wine, anyway.
Posted by Anne at 13:03

It's great hearing an Australian wine name on a Scandinavian site. Quite amusing really...especially as Rawsons Retreat here in Australia is extremely cheap; the kind of wine poor university students buy. But it's a good, decent, everyday wine nonetheless.
I noticed in Europe recently that all Australian wines were in the middle price range. Import costs, I guess...and the percieved exoticness of wines from Down Under. ;-)

Hi! Oh, how funny to hear that it's a student-kind-of-wine! :) Here, it's just a little more expensive than those. I think I paid 74 SEK for it, which is around 14 AUD. (Or 11 USD, or around 8 euro.) Cheapest wines here are around 50 SEK - with the state monopoly, we also have very high taxes on alcohol. So, whenever Swedes go abroad, they drink (and buy) like crazy. :)