More cheese. Is that all I eat? 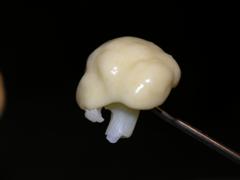 It's not, really, but this has indeed been a very, very cheesy sort of week. Anyway. We made cheese fondue for the first time on Friday night. Fondue is SO 80's for me, but it's been long enough for a revival. (I think.) Not having my own fondue pot, I borrowed my parents that has been resting on top of a cupboard for several years. It's really a gorgeous thing, made out of copper. I've only made oil fondues before, and one noted exception of a great chocolate fondue.. but never cheese. Per was absolutely delighted - he loves melted cheese, and having a whole big pot of it - heaven. I'm less enthusiastic though, but was certainly willing to give it a try for his sake.

I followed a fairly standard recipe out of my little (actually Per's - knowing his fondness for fondue, I bought it for him) Fondue Cookbook. It called for a little bit of white wine (I used a Riesling), emmenthaler, gruyere, a little garlic, cornstarch, kirsch (which I didn't have - substituted sherry), salt, pepper, nutmeg and a little paprika. (Which again, I substituted for chili.) I also added a little bit of brie, keeping in mind a recent post from a foodblog - embarrassingly I can't remember which one. It was part of the Is My Blog Burning Cooking with Wines and Spirits, anyway - I have it bookmarked at my work computer.

It was easy enough to make, and we served it with chunks of a most excellent baguette, cucumber sticks, blanched carrots and cauliflower, and filoncini. (That last thing? It's like a grissini, but thicker. A breadstick, in other words, and in this case, flavored with rosemary. Really good!) I ended up liking the cheese on the veggies, but not so much on the bread. Per loved it on everything.
Posted by Anne at 11:25

That's a GORGEOUS picture Anne! And I'm with your hubby on this one - I'm all for cheese...

Oooh, thank you :) Well, if you ever stop by Stockholm, I'll make it again for you!