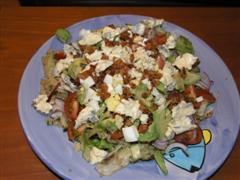 First of all, I just discovered that I was mentioned in one of the liberal political blogs in Sweden . Per Gudmundson expressed surprise that I, a political secretary working for the liberal party had a blog. About food. Frankly, I don’t find that strange at all. After all, it’s allowed to have more interests than one, right?

Anyway. When I was an exchange student in Long Beach, ten years ago, I discovered the wonders of Cobb Salad. Here’s the official story:

"One night in 1937, Bob Cobb, then owner of The Brown Derby, prowled hungrily in his restaurant's kitchen for a snack. Opening the huge refrigerator, he pulled out this and that: a head of lettuce, an avocado, some romaine, watercress, tomatoes, some cold breast of chicken, a hard-boiled egg, chives, cheese and some old-fashioned French dressing. He started chopping. Added some crisp bacon -- swiped from a busy chef.”

And then it made it on the menu.

I had lunch at home the other day, and I was extremely hungry. Extremely. Cobb salad was on the back of my mind, but.. not quite. I wanted blue cheese, and I had no chicken. And it kind of went from there… I decided to do my own version - and I call it Cobby Salad. I snicker as I type, I find it really amusing – not only because it’s cobb-y, cobb-ish, but also because of my cats. See, I have British Shorthairs. They’re one of the traditionally cobby breeds – cobby in this case meaning short and squat, rather than elongated. (And this is all relating to their body type.) Oh well. Without further ado then – Cobby Salad.

These measurements are very rough – I didn’t measure anything, and pretty much just tossed everything together. I know Cobb salads are often presented in pretty stripes, but I much prefer a tossed salad.

I won't bother with instructions - it's pretty much just a matter of getting it all on a plate. However, I did marinate the lettuce, the bulgur and the sprouts in the olive oil and the vinegar, and I added the sugar to that, too. That was the base, and everything else pretty much went on top. It made for a very sturdy lunch indeed. And it as very, very yummy.
Posted by Anne at 08:39

Greetings. I found your blog via Gudmunssons blog and i find it good that people working with politics have other interests.

I thought i would give you some other blogs that are about food and cooking.

I myself now and then add pointers and write about cooking. Just recently in this post.
http://paradox66.blogspot.com/2004/11/googla-middagen-det-r-troligt-att-du.html

And then there is these three women who use the option writing a blog together.
http://www.ragazze.blogspot.com/